The best writing is easy to read. Easy to understand. And easy to recall.

Which is easy to say – not always so easy to do.

One idea that can help us all be better writers, whether we’re writing copy for a website or an email to our boss explaining why that conference in St Tropez looks like such a good idea, is to remember that the best writing, like the best rivers, moves in one direction. Which simply means that it relays events and ideas in the order that they happened, are happening, or will happen. 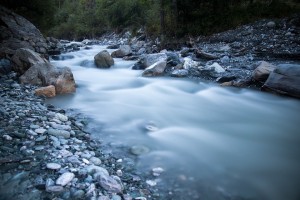 Sentences set up to do this are significantly quicker to read and easier to process than ones that don’t. To understand why, it’s useful to look at what’s happening in our heads as we read.

The importance of prediction.

Several things are going on all at once when we read. We’re recognising the symbols on the page, turning them into sounds that make words, then drawing out meaning from these words based on their relationships with the words around them. It’s a cognitively exhausting process – no wonder it’s so easy to doze off with a book!

To ease the load slightly, our brains are subconsciously making predictions about what we think will come next. We do this all the time and not just when we read – the more we can accurately predict about any event, the less effort will be required to process it and the more we can focus our attention on more important things, such as enjoying it. In writing, this extra attention can be used on understanding and retention.

Here are three ways you can do this in your own writing to get your point across in the clearest way.

The predictions we make are based heavily on context. In the early 20th century, a literature professor at Cambridge, I.A. Richards, carried out an experiment where he removed the author’s name and title from poems, then asked students to analyse them. They found it nearly impossible. Without their context, the stanzas became much harder to understand.

The same principle applies to almost any document we read. We make predictions about what to expect based on a whole range of stimuli, from superficial elements such as presentation or medium (hand-written love letter or email spam), to textual elements such as headlines and opening paragraphs.

The more your reader can predict about what’s coming the faster they will read. Start your emails, sales letters or blog posts with quick summaries. Start your paragraphs with one-liners that neatly sum up what the rest of the paragraph is going to be about. Start your sentences… well, let’s talk about that next.

Despite the almost infinite grammatical differences between the world’s languages, it’s interesting that nearly all of them use the same structure to describe action.: Subject, Verb, Object. This ‘active’ structure naturally follows the way we experience events.

For example, with the sentence: I threw the ball to Pete there’s a clear chronology. As a reader, you encounter all the main ingredients to the action – me; the ball; Pete – in the order that you would if you were watching the scenario live.

The passive form of the same sentence: the ball was thrown to Pete by me – reverses the order and forces the reader to rearrange the event in their head. It’s taking more cognitive effort to come to the same understanding.

Go with the Flow

The ‘throwing the ball’ example above was relatively simple; it does not take too much brainpower to realign the events into a chronological order. When sentences become more complex, however, the concept of flow becomes more important. In a nutshell: the less that our readers have to backtrack to understand a sentence, the more fluent and easy to understand our writing will be. In contrast, every time a reader has to stop and reassess what they thought they knew about a sentence, it causes a break in flow and makes retention and understanding that little bit more difficult. Linguist call these ‘garden path sentences’ – a few examples might be:

Nylon clothing is usually made of is produced in China.

The journalist wrote the piece was likely to fetch a high price at auction.

In each case, we are forced to double take as our initial expectations about where the sentence will lead are proven wrong.

Keep your reader on the right path.

Place verbs close to their subjects. In the first sentence, for example, we assume that ‘plans’ is a verb, but it is actually functioning as a noun. As readers, we prefer the verb to immediately follow its subject, but here we have to wait a further 8 words until the true meaning of the sentence is revealed.

Use ‘linkers’ to aid understanding. In the second sentence, placing ‘that’ between ‘nylon and ‘clothing’ would give us a clearer immediate idea of the relationship between the two words.

Be as specific as possible in your language. The less possibility there is for ambiguity, the more chance of your readers understanding your meaning. In the third example, simply by changing the word ‘piece’ for ‘antique’ would have made the sentence easier to grasp first time.

Disclaimer – there will, of course be times when all these rules can, and should be broken. Passive tense is great for presenting a methodology for example. Building in an element of surprise to your sentences might just be an effective technique to grab attention. But know the rules to break them, right? And in the majority of your communications – emails, newsletters, blogs and more – quick clear information is the best way to get your message across.

Clear writing saves time and money. Are unclear emails, vague memos or indecipherable reports a problem for your company? Get in touch to ask about my Writing For Clarity Workshops. Full or half day options available.