One of my fondest memories from last year was seeing a friend surrounded by the realia of his dream. This is what it looked, sounded and smelled like. The growling coffee machines, the chiming cutlery, the wet coats thrown over the backs of wooden chairs. The counter top, sawmilled from the trunk of a tree felled on the nearby Gower Peninsula.

Matt was finally there, amongst the customers and bare light bulbs (a stylistic feature, not a budget choice) of Square Peg Café. It was so good to see, because I knew how long it had taken him to get there. How many false starts and let downs there had been along the way. How many times he’d nearly given up. He’d been talking about the idea when I moved to New Zealand. When I returned three years later it was still a long way from reality – yet another property had pulled out when they heard the words ‘social enterprise’. 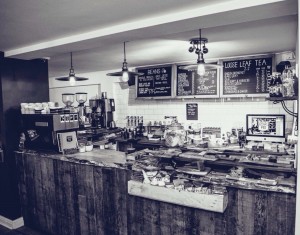 Matt didn’t just want to start a café. He wanted to pursue a whole new way of doing business. He wanted to give his profits to charity and to help young, disadvantaged people gain experience of work. It was one hell of a powerful ‘why’. Without it, I’m not sure if he’d have made it.

What I love about Matt though, is that he knew from the start that a worthwhile purpose wasn’t going to be enough. Not long term. So he did everything he could to make sure his coffee was the best in town. Attended coffee shows up and down the country. Learned to taste the different notes of Guatemalan, Kenyan, Brazilian and dozens of other blends. Trained with some of the best baristas in the UK. Bought scales that can measure to long decimals of a gram. Damn, their coffee’s good for it.

One night, a few months ago, and after just a little persuasion, Matt spoke about the journey he’s been on with Square Peg Café. We don’t always see the hard work that turns ideas into things. Sometimes it can seem these achievements come easy for others. They don’t. There is always perspiration.

Matt said it was nice to talk about his journey. To wrap it up and see how far he has come. People who heard him said it was inspirational, and it made them want to do inspiring things too.

It’s funny, because people always say that Swansea is the graveyard of ambition. But ever since the return from New Zealand I mentioned before, I’ve met nothing but amazing people doing incredible things here. A couple more of them shared the stage with Matt that night, and they blew people away just as much as he did.

It seemed like a good idea to do it again, so we did. This time we asked the people who had spoken to choose someone they wanted to see speak.

Wow. They were good.

So the Peg Talks are going to keep on running.

The next event event is 17th March in the Square Peg Café. If you’re quick, you can get a ticket here. And here. 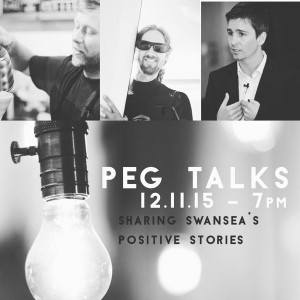