Brisbane, 2001. A hot, humid afternoon, a busy pedestrian thoroughfare. A busker stands in front of a small plantation filled with birds of paradise and bromeliads.

At least I thought he was a busker. Then he started playing. His portable amp was turned up too loud, he struck out-of-tune strings with no respect for rhythm or melody; he paused between chords and with painful effort forced his fingers into new shapes.

I was 18, travelling Australia alone. Deep into a Kerouac phase and obsessed with ideas of beat – convinced that there was wisdom to be mined from these philosophers of the street. He noticed me watching. I noticed the 6-pack of FourX at his feet.

I can’t remember how we started talking. How long the conversation went or what else was said, but one line sticks with me. For accuracy, I’d recommend reading it in the broadest Aussie accent your imagination can muster.

“I wanted to learn guitar, so I thought, if I’m gonna learn it I might was well get paid for it.”

I couldn’t afford to support his endeavour. I wished him luck and walked away, back to my travels, to home and to university, into my thirties via careers, start-up dreams, and life. All the while hampered by one of creativity’s most persistent curses. Perfectionism.

With retrospect, I can’t help thinking I should have listened a little harder that day. I’d have heard more than out of tune chords and slurred speech. I’d have heard the confidence to stand in the middle of the street and not give a damn what anyone else might think.

It’s an extreme and imperfect example, I’m aware. I don’t want to suggest we all rush outside with our new instruments, fag-packet business plans or half-baked inventions and began demanding money. But a measured dose of that spirit – the willingness to not wait, but do – could have helped me a lot over the years. So many projects self-judged not quite good enough – just a little longer, a couple more tweaks.

What I’ve learned, when, either by chance or necessity, I’ve had to share ideas and projects before I would ever dare call them ready, is that these are the ones that have had success.

The world breathes life into your dreams. The catch is that you have to let it see them first.

Saying them, writing them, doing them, makes them real – it forces new levels of urgency and ramps up the excitement. People come on board and tell you what’s good. It makes you accountable in whole new ways.

And if they’re not good enough? Then you learn that a whole lot quicker too. But not through the ridicule or embarrassment that perfectionism can have us fear – think of my guitarist, a street filled with hundreds of people and not one (bar me, a fan) paying attention. No, people are too busy to mock projects that don’t interest them; before you start to succeed there’s just silence and it’s a safe place to play. The challenge of getting a new idea heard isn’t to avoid embarrassment but to catch attention. The best – maybe the only – way to learn this is to try.

Put up that website and see what people think. Send out that short story or demo tape. Post that Medium article you’re not sure about. Introduce yourself with that funky new title you’ve thought up and see how it feels. Wear that hat.

Because two strong ironies exist around perfectionism. The first is that perfection is the ultimate rainbow’s end, never quite attainable no matter how hard you try. But the second is that you’ll only get close when you ignore perfectionism, and test ideas live.

I’d like to think that 15 years on, my guitarist friend is a virtuoso player, drawing crowds on sunny Brisbane afternoons. That along the way he found the tunes to get people to drop money in his upturned cap, that he honed them and learned more of the same. I’d like to think he does gigs in the local bars, has a small and loyal following, a couple of CDs.

Why not? He was going the right way about it. 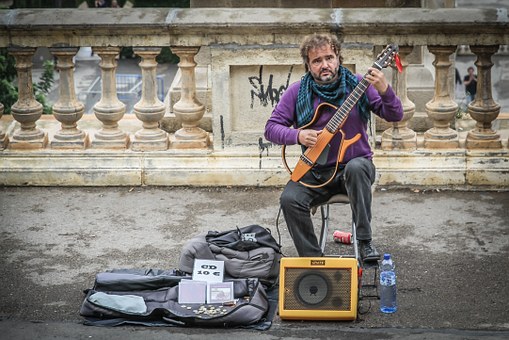